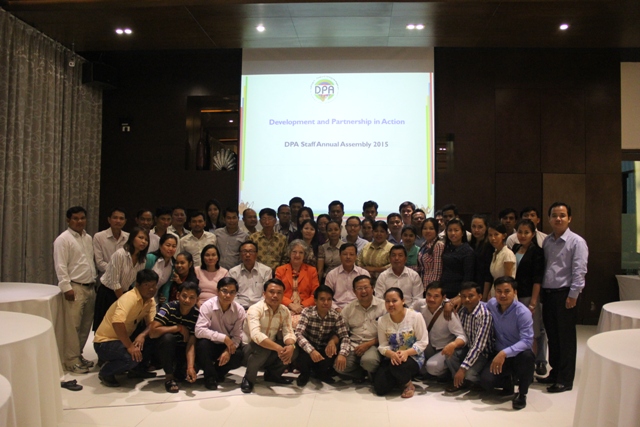 On the 30th November to 3rd December 2015, Development and Partnership in Action (DPA) conducted its 2015 annual staff reflection and annual staff assembly at Sihanouk Vile and Tonle Basac II restaurant, Phnom Penh.Officially opening the event, Mr. Mam Sambath, Executive Director of DPA mentioned that this one and half days for staff annual reflection, one day for team building and a half day for annual staff assembly was mainly organised to not only disseminate the key achievements of DPA’s projects/programmes but other important issues including:

During DPA annual staff assembly, Mrs. Jenny Pearson, Chairwoman of DPA’s governing board mentioned that “It is now more than 20 years since I began working with CIDSE on staff capacity development and then over time supporting the process of localizing to become DPA. As an organization you have achieved many good things, and are a shining example to other NGOs for how to be effective and successful through putting your ethical values into practice in your everyday work.”